I am what you might call a house mouse. I like being at home, in my jogging pants with my slippers and my own things. Sure, I enjoy being social, but I'm never unhappy to just sit in my living room and putter. Jagger, on the other hand, gets restless. He likes to go out and see people and do things, especially on the weekend. This past weekend we had a rather lazy time. Lots of Christmas shopping and I worked on transcripts for the bulk of the weekend. On Saturday I didn't take a shower until 6:00 p.m. and on Sunday I just took a bath before bed. Lovely.

I can't wait for next week when it's nothing but lounging as far as the eye can see! I'm off work as of 11:30 this Thursday until 8:00 a.m. on January 4th and could not be more excited about it! Jagger's going to his parents from the 26th to the 30th, so I'll have lots of time to get lots of nothing done.

My plans for the week include...

- Reading, reading and more reading! I have an obscene stack of comic books waiting for me (including the entire Blackest Night series thus far - gah!) and I can't wait to settle into an entire afternoon of going through them all! I will also hopefully have lots of new Christmas books to keep me occupied, as well as lots of reading to be done for January's Graphic Novel Group meeting (it's Batman month!)
- DVD/Blu-Ray watching! I'm still behind on the LOST rewatch I'm participating in over on Nikki's blog so I plan on spending a solid day having a LOST marathon and can't wait! I also need to finish watching Mad Men season 2 and would like to rewatch True Blood season 1. Also, hopefully I'll have lots of new movies and TV shows to watch from Christmas!
- Knitting! I started knitting a blanket for some friends who had a baby...I started it in March, and the baby was born in August and it's still unfinished. Terrible. Knitting usually goes along with watching Mad Men (it makes me feel domestic) but never with watching LOST. I have to make notes while watching LOST. (I know, go ahead and laugh)
- Movie theatre-going! I'm already planning to go see NINE with my friend Jerri, and I still want to see The Fantastic Mr. Fox with my friend Jenn. Jagger and I also have plans to see Avatar with our friends Dan and Amanda, so there should be lots of movie attendance for me over the break! Movie-going also involves me wearing jogging pants, and often me wearing slippers as well.
- Purging of things! Christmas always makes me want to organize - out with the old, in with the new! I desperately need to go through things and get rid of lots of stuff, it should have been done after the wedding, but somehow I never got around to it. Hopefully I can get lots of this done while Jagger is gone, and then when we do get around to moving, it should be a breeze!

Beyond that, it should be a nice, quiet break. I'm house/dogsitting for the week, so that should be fun.

What about you? Any big plans to do something or to do nothing over the holidays?
Posted by Unknown at 14:27 4 comments:

I don't really need another reason for wanting to move out of the apartment, but I thought I would share with you all one of the major reasons for needing more room.
Well, more than one reason...I'm not sure how many there are, but probably close to 1500 reasons... 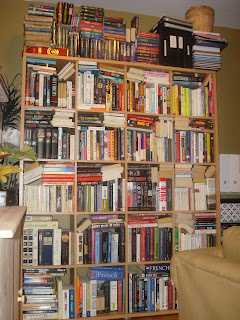 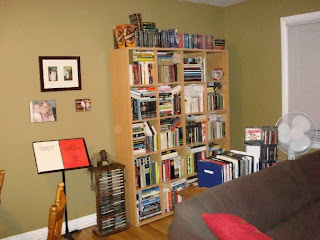 Look at all that empty space! I can't believe it was like that once! And that that was the only bookcase we had! Now in addition to this bookcase that is packed to capacity we also had to add this bookcase... 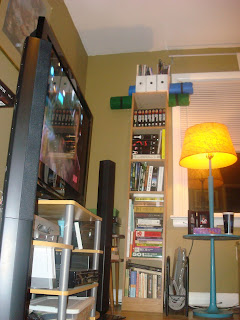 Not nearly as big, but just as packed. We also have a special little bookcase just for the comic books that are now slowly taking over the apartment... 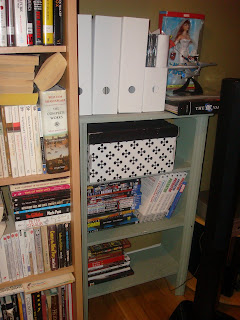 It's not nearly enough space - that box is full of comics that need to be bagged and boarded and set up properly in files...things are out of control.
So yeah, it's time to find a new place for all these books to live. A house with built-in bookcases would be a dream come true.
Posted by Unknown at 20:09 2 comments:

We went to a London Knights game tonight thanks to our friends Kyle and Lisa who gave us some tickets - thanks guys! It was a great game with the Knights winning in a shoot-out. There was a family sitting behind us with some kids who has some hilarious insights on the game...


It was also a McDonald's sponsored night, so there were special appearances by all the McDonaldland characters - check me out with Grimace! 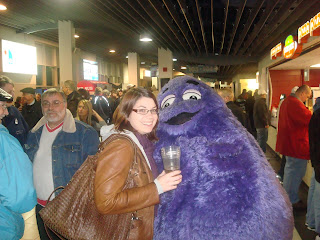 The best part was when I explained to the guy over my shoulder who Grimace was. Great night. Hope you all had a great weekend!

Email ThisBlogThis!Share to TwitterShare to FacebookShare to Pinterest
Labels: random

So, now that the wedding is over and done with, I'm officially throwing myself into house hunting, much to Jagger's chagrin. Just in the last couple of weeks I've really felt fed up with the apartment, and really need to get going on moving on. The apartment is just closing in on me and I keep knocking things over and tripping over things, it's just time to move on.

Our apartment is small, I know that. We've always known that, that was the whole point of the apartment. We decided to get something small and cheap so we would be forced to move on before we got too complacent. This April will be our third anniversary in our tiny little home. I do love our apartment, but enough is enough. Time to move!

Once we get through the holidays, we're going to talk to the bank and get the ball rolling. I'm currently obsessed with checking out houses on MLS (who isn't?) and looking for lovely interesting bits of furniture on kijiji.

I've become obsessed with finding midcentury modern pieces for our future dream home...I've been watching too much Mad Men, I think. 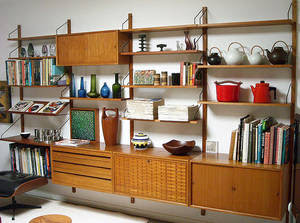 See the pretty? I would love to have fantastic pieces like this for all my storage...
The problem is, as usual I don't want to spend money on it. Hence, the following conversation last night...
Jagger - "What are you doing?"
Me - "Looking on kijiji."
Jagger - "Oh no, for what?"
Me - "I'm looking for vintage midcentury modern teak furniture. I've decided that that's how we should decorate our hypothetical house."
Jagger - "Oh, sure."
Me - "People know how much it's worth though. I want to find a bunch of cool pieces for crazy cheap from someone who just thinks they're junk."
Jagger - "So you want to rip someone off?"
Me - "Well, I guess. But nicely. I think it's going to be my project for the summer, scouring yard sales and junk shops for pieces."
Jagger - "Great."
I really don't think he shares my enthusiasm. I'm really hoping to stumble across some fantastic yard sale where some little old lady is selling all her old furniture and it's just fantastic stuff that she wants to get rid of for like a dollar or something, that would be a dream. Why don't people have yard sales like that? Why is it always people selling half used candles and furniture made out of dusty old wicker? I think TV has let me down on this, people on TV always find cool stuff at yard sales.
Posted by Unknown at 09:31 5 comments: